I bought an adult colouring book and I like it 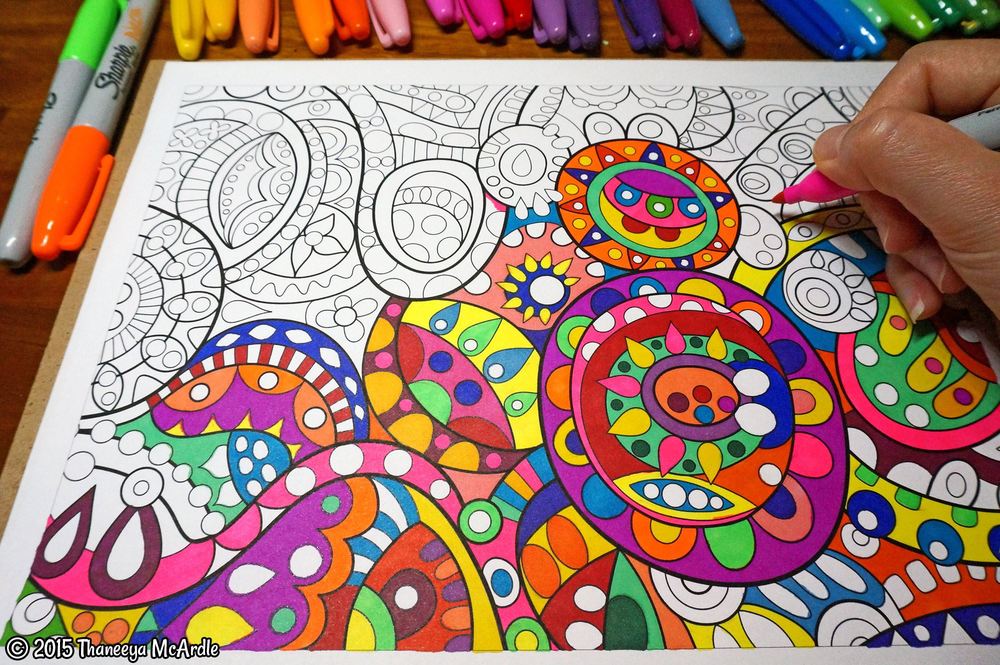 If you’re not finding mindfulness in yoga, meditation, or that glass of wine, there’s a new option: adult colouring books.

But they aren’t the colouring books we had as kids – full of Disney princesses and flowers. These are specifically for adults to help relieve stress and practise mindfulness. They get us to put away our technology and force us to focus on one task – colouring in.

We’ve been colouring in Emma Farrarons’ “The Mindfulness Colouring Book“. We find colouring within the lines helps our mind to focus. When our mind wanders (as it often does), patches of colour would escape the lines! A good reminder to bring our attention back to the task at hand. Farrarons’ book is also coat-sized, so it’s easy to take with us. Fancy colouring in on the train or at the bus stop? A handy alternative to reading our phones.

Farrarons’ says that she finds colouring relaxing and therapeutic. She writes on her blog,

“I’ve been practicing mindfulness the past three years. It has been a great way for me to wind down. As an illustrator and graphic designer living in busy London, I’m always working on multiple projects (actual ones and brainstorming new ones). My eyes are in continuous exposure to computer screens, tablets, and my iPhone. So my brain tends to go on overload with thoughts. Mindfulness has been helpful way to switch off my autopilot way of life.

I’m certain fellow illustrators will agree that illustrating can be relaxing and even therapeutic. There is something comforting about picking up a pencil and drawing. I forget about everything around me. I’m in the moment, feeling the blank sheet underneath the nib, hearing the sound of the lead scratching the surface of the paper. To me, it’s the same with colouring-in. Maybe it’s a feeling of childhood nostalgia, spending a day filling in scenes, choosing the next colouring pencil…hours free from thought.”

Perhaps time to whip out those colouring pencils?   I know what I’ll be doing tonight.